Layer . . . The Key to Transitioning Your Seasonal Home

Over time, there's a secret I've discovered that invites our home into a smoother transition from the first whiffs of autumn through Thanksgiving, right into Christmastide and then beyond, embracing a gentle, cozy comfort through the endless winter's long, dark months.

Back in the day, I used to decorate for fall and Thanksgiving - orange pumpkins, an apple themed table runner, fun little gourds, rusty colored tchotchkes, apple scented candles, stuff like that.

And then abruptly, barely before Tom Turkey's bones had been turned into a huge vat of soup, we were packing up all things autumnal and dragging out scads of Christmas stuff that had slowly but surely accumulated over the years.

Window lights, tree lights, the actual tree itself {sometimes two}, a grand wreath at the door, at least one manger scene, a million and a half assorted ornaments, an advent calendar, and endless boxes of family memorabilia and vintage decor and all things pine-scented.

It was all so exhausting.

Frustrating, too, because we had just begun to settle into the decor that had made its grand arrival only a month or so before.  It was kind of sad to say such a quick and abrupt good-bye.

This year, I abandoned orange.  Goodbye.  Sorry, but you were never my favorite color to begin with.

It didn't take long to find the big blue pumpkins I craved, one for the brick steps to the front door and a sister pumpkin to hold court by the kitchen door where all the action is.

And instead of looking for some kind of autumn-y wreaths for the doors, I began my hunt for wreaths made up of twigs and big ol' fake red berries.  And wonder of wonders, after a bit of patient searching, I found them primed and calling my name at a local shop.  I couldn't get them on the doors fast enough.

Fast forward to mid-November.  The red berry wreaths will stay where they belong, where they are loved and admired, right through Thanksgiving, Christmas, and into the long winter that defines life here in this neck of the woods.  In other words, 'til next spring.

The blue pumpkins will remain 'til they die a natural death sitting out in the damp, freezing chill that's been descending.

Candlelight appeared on our sills in mid-October and will illuminate the house well into February.  It's far too dark around here for too long and their pretty nightly glow is oh-so-necessary. 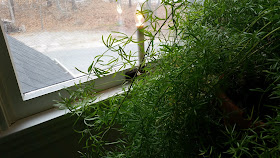 Meanwhile, I found this adorable wall hanging for all of $14.95 at TJ Maxx this week.  I couldn't grab the last one too quickly.  I'm in love with these very fun bunnies navigating a snowy scene as they travel around their Christmas tree farm.  It's replaced my 1984 cross-stitch sampler ... and will probably stay on the wall well into January.

I love it that much.

And this picture helps me think nice thoughts of rabbits after they demolished my beautiful rosebush, my fledgling maple sapling, and several rounds of sunflowers this past summer. 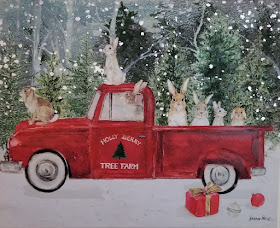 And there's a faux pine wreath attached to an old window frame already perched on the mantle because I love it even if it is only November.  And if you look closely, there's an elderly faux pumpkin nestled in its boughs.  I think she'll probably magically disappear right after Thanksgiving while the wreath will refuse to budge well into late January.

Yes, the apple-scented Yankee Candle is still going strong.  But sometime in the next few weeks, she'll burn herself out and be quietly replaced by the pine candles that are patiently waiting their turn on the mantle even as we speak.

And after the Thanksgiving crowd comes and goes, a Christmas tree will make her glorious presence known.  I think my Grandma's fragile ornaments might make an appearance this year since the gang will be elsewhere.  I'm guessing that even after the ornaments come down, the tree will remain well into late January, bare naked except for the twinkling lights that will refuse to take their leave, allowing the darkened house to bask in their sparkly glow, lighting the shadows every evening.

There's an easy flow going on here and oddly enough, the gradual layers that come and go do nothing but lead to that slower lifestyle that so easy eludes me this time of year.

For the decor seems to morph in its own gentle rhythm from one season into the next.

I couldn't be happier with the layer upon layer that defines our home.  Not just what fills the rooms.  But for the roots that are growing deep, the memories that are beginning to take shape, and the life changes that have emerged after half a decade in our little house tucked between the ever-changing bay and the deep blue sea.

The exhausting decorating marathons are gone.

Instead, a peaceful kind of gratitude holds center stage.
Linda

P.S.
I'd love to hear about your holiday home and your decorating hints and your sanity savers ...

P.S. #3
Our final Book Club session is coming up this Friday and I have absolutely no idea of what future posts will look like after that.  Nothing's lined up in the queue.  Curious as to what's ahead?  Me, too!  Be sure to subscribe so you don't miss out on any surprises.

I'd Rather Be Reading * Grand Finale  >>